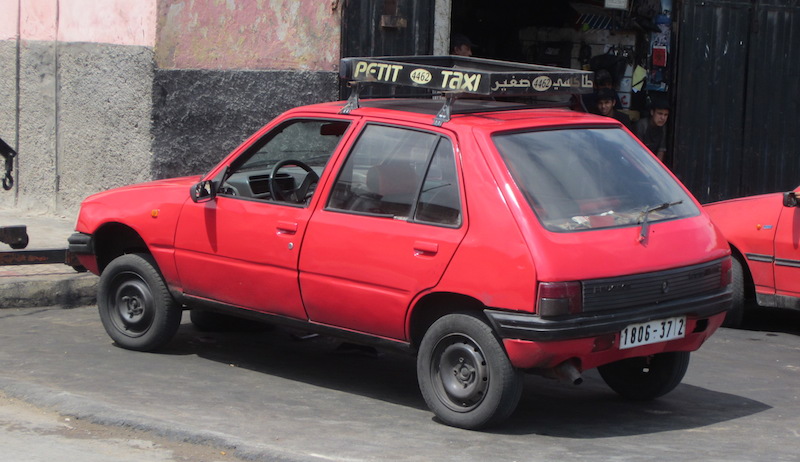 Taxis in Morocco are the most popular forms of transport. Even though there is a rail and bus service between major cities, the network is not so expansive and punctuality is still an issue. Flying is also an option, but tickets are extremely expensive by European standards. So taking taxis is the most common way of getting around, for both short trips in the city to long-distance journeys across the country. Taking a taxi in Morocco is not as simple as in other countries, and there are a few things to be aware of before you take one. This article is going to focus on the different types of taxis in Morocco, along with the advantages / disadvantages / costs of each one.

The first type of taxi on our list is the Petit Taxi. Coming from the French word petit, meaning small, a petit taxi is only for short distances and carry 3 passengers; 1 in the front and 2 in the back. A petit taxi cannot leave the city limits, so cannot be used for inter-city transfers. They are just for short trips around the city centre and suburbs. They are abundant in most Moroccan cities, and can be found without much difficulty. There are taxi ranks dedicated to petits taxis in strategic positions across the city. These ranks are often combined with a grand taxi stop, which is a different type of taxi.

Petits taxis are very cheap. The cost of taking a petit taxi is much lower than the equivalent of taking a taxi in Europe or the US, but bear in mind that the condition of the vehicle may not be up to the same standards. Taking a petit taxi at night time is more expensive than during the day, but only by a little bit. As in European countries and the US, it is customary to leave a small tip to the driver.

Petits taxis often do not have meters, so it will be necessary to negotiate a fixed price in advance with the driver. As a tourist, this could leave you open to exploitation, so don’t forget to read our article about taxi haggling in Morocco. Some petits taxis in big cities do have meters as a measure to prevent tourists from being ripped off, but some drivers might not want to turn it on. If this is the case, you should get out and find another taxi.

Most Moroccans share their taxi with other people heading in the same direction, so your taxi might not leave until all of the seats are taken, and may stop on the way to pick up others. You can hire the whole taxi for an agreed price, but be prepared to pay over the odds, although if you are in a rush then you don’t really have any other choice.

Petits taxis are easily identifiable in each city because they are all the same colour. For example, in Casablanca they are red, but in Tangier they are blue. Here is information about the colours of petits taxis for each city:

It is a fact that petits taxis are not well-known for their comfort, so don’t expect leather seats and air-conditioning. The average petit taxi is a small, 4 seat vehicle such as a Fiat Uno produced in the 1990s. While they are not comfortable, they are perfectly fine for short journeys around the city.

These taxis seldom have seatbelts either, so if you are travelling with young children for example, you may prefer to book a better vehicle through a private company. The roads and driving habits in Morocco are not great, and in the city it can be quite chaotic at times, so taking a petit taxi could be stressful if you have children. However, it does seem to be an organised chaos, and the drivers are more than used to it.

Despite the size of a petit taxi, it is probably too big to drive down most streets in the medina, so if your destination is in the medina of a city in Morocco, bear in mind that you will probably have to walk the last leg.